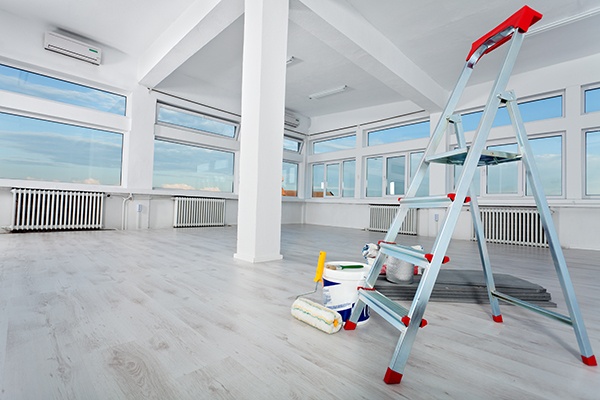 An ample glass line has always been an important amenity in any office building. However, the way that you deploy that glass line is different. In the past, it'd go to benefit executives in corner and outdoor wall offices. Today, your office build-out should democratize sunshine, leaving the windows as unobscured as possible. This way, everyone gets the benefit of natural light, which boosts health and productivity and can reduce your lighting costs as well.

If you have any doubt about how to use a given part of your office, the answer is easy. Leave it open and don't build anything there. You can always create divisions and workstations with furniture if they become needed. In the interim, though, space where people can meet and collaborate is always better than an unused, empty office or built-in cubicle farm.

When it comes to building for energy efficiency, it is usually much less expensive to build it in from the beginning of a project than to retrofit an existing space. Think about it. Would you rather pay an electrician to install a light switch, then have him come back later to remove the switch, throw it out and install an occupancy sensor, or just install the occupancy sensor from the beginning? In 2015, the US Green Building Council found that building a space to be green from the ground up increased costs by just 2 percent.

4. You Can't Have Too Many Conference Rooms

All of this being said, if you're going to overbuild anything in your office build-out, make it conference rooms. Small to mid-sized conference rooms can serve limitless purposes. In a pinch, they can turn into team rooms, break rooms, training rooms, private offices or oversized calling booths. All in all, they should prove to be some of the most useful space in your office.

No matter how much buzz surrounds wireless technology, business runs on wires. Whether you're using fiber or Ethernet to send large quantities of data without interference or you just need to charge a battery powered device, the more wires you include in your office build-out, the more options your users will have as their use of the space evolves.

The day of the generic office build-out has passed. Even Fortune 500 companies are seeking out funky co-working spaces for temp and field offices. Figure out your company's culture and its zeitgeist and build that identity into your space. Ultimately, the more personality you include, the more morale and loyalty your space will drive.

The Future of Office Space