Sense of Purpose and Your Next Office Space 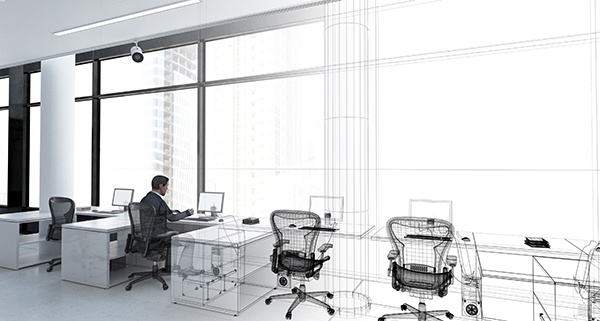 The History of Office Design

Traditionally, offices were built to reinforce hierarchical management structures. As a person went up the corporate ladder, they would move from an open desk to a cube to a windowless office all of the way up to a large office in the executive suite, usually on the top floor.

The open plan office is the opposite of the traditional design, and it has been around since the mid-1950s. While it was traditionally used in limited settings (like trading floors or typing pools), its popularity grew as the 20th century entered its last decades. Office design became even more radical as cubicle farms turned into almost completely open spaces. These spaces decreased hierarchy and increased collaboration, but they also reduced employee satisfaction and grew stress levels.

Office design experts realized that they needed to find a way to blend the two archetypes. Creating offices that combined open elements and areas with privacy allowed their clients to maximize space and human efficiency while providing both opportunities for collaboration and for quiet focus-based work.


Office Design and the Millennials

The Millennials bring an additional layer to the need for hybrid office design. The most in-demand members of that age cohort don't necessarily work for money or for social status. Instead, they work because they feel a sense of purpose in what they do. That concept is now a unifying principle in office design.

Think about it for a second. Why don't Millennials all work from home? They don't do anything else "normally." Millennials don't own cars, look at microunit apartments, get everything delivered, and communicate using protocols and systems that didn't exist a decade ago or, in some cases, a week ago. They might work from anywhere and everywhere at any time, but they don't telecommute.

Purpose, for Millennials, means connection. It also means doing work in the most efficient place. They don't need a corner office from which to manage. If they can best achieve their purpose from a desk in the middle of an open floor, like Michael Bloomberg's offices before he became Mayor of New York, that's where they will work. On the other hand, if they know that the best way to get their work done is to hole up in a private office where they can put on headphones and avoid interruptions, that's where they'll be. And your office layout has to accommodate all of those working styles, all of the time, since you can't predict what they'll be doing and when.

Choosing The Right Office Layout for Your Company

Stripping their idiosyncrasies aside, though, what these young workers want makes a great deal of sense. After all, shouldn't your office space have a design that allows everyone there to be in the most appropriate setting so that you can squeeze the most economic value out of their time? Don't you want your office workers to all have a sense of purpose that drives them to care about where they are working and how much more they can get done? While a flexible office space might seem like a management nightmare, what underlies it all is higher productivity and, hopefully, higher levels of profitability.

Some of our other office articles:

The Future of Office Space

Six Amenities to Look for in Office Space